The pressure of presidency has really made Obama go wild. He has recently made history by being the first president to flaunt his naked toes in PUBLIC! 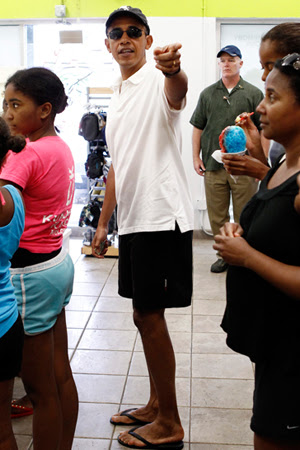 Who can take this world leader seriously now that we know what his feet look like. What else can we expect from this Hawaii native... a SPEEDO?? 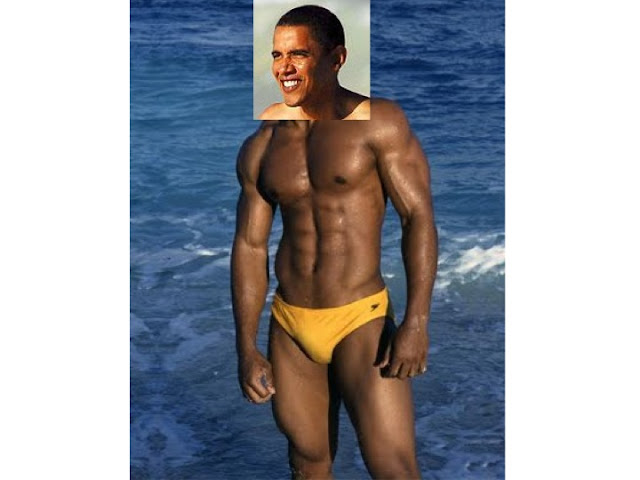 Don't you know the rules set by your predecessors, Obama? You must wear your dress shoes at all times, even when frolicking by the sea side like Nixon.

Obama's lackadaisical approach to  footwear has had an incredible effect on other world leader's footwear choices...
Former President Bush has been spotted in Crocs. 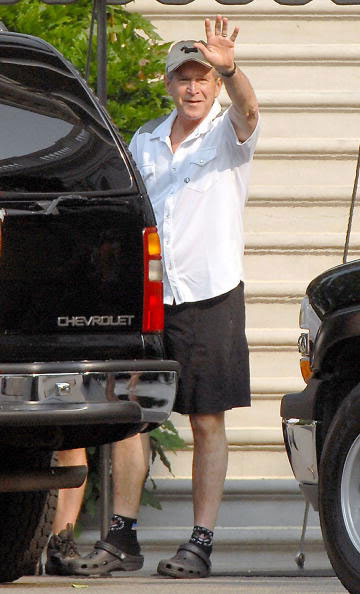 At least he managed to keep it classy with socks yielding the presidential emblem. 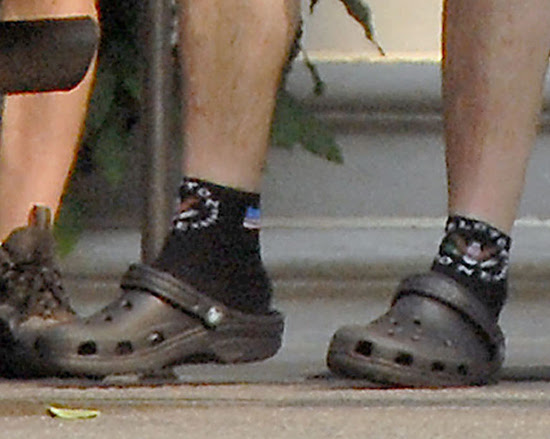 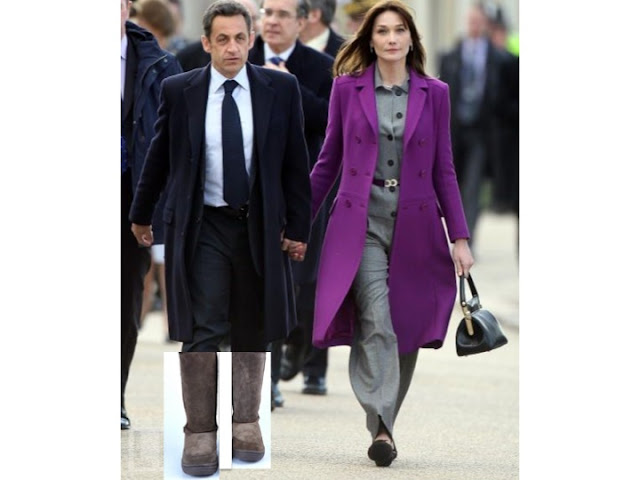 Sarkozy was seen out and about yesterday showing off his favorite pairs of UGG's.
Even, North Korean leader, Kim Jong-Il has followed suit! 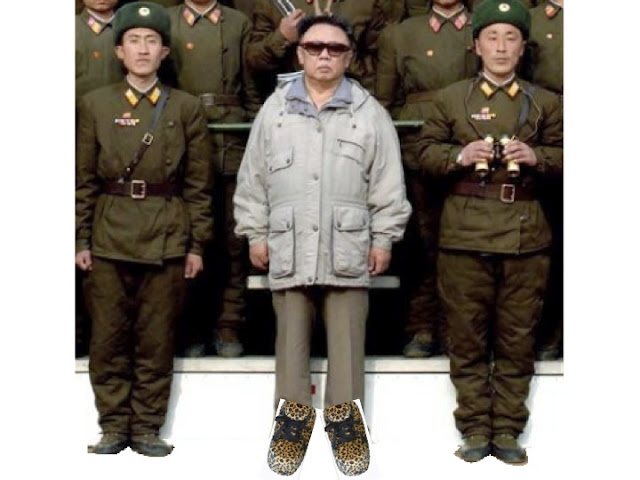 Kim was seen sporting the super hot Snooki Slipper. He is a huge Jersey Shore fan and an avid fist pumper. 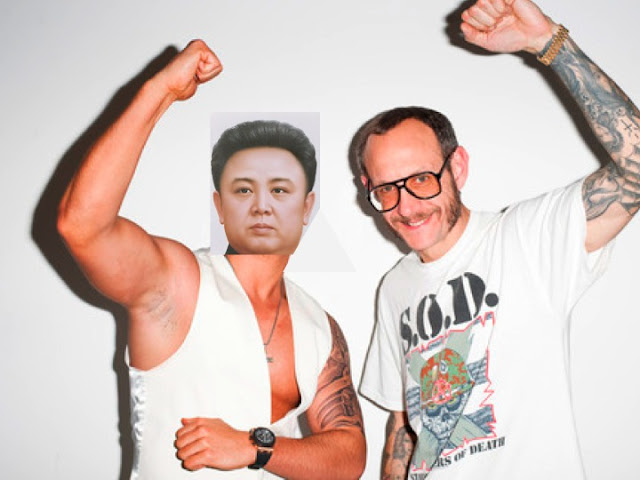 The point is Obama has to understand the power he has over other world leader's fashion choices.
I beg you, Mr. President, whatever you do, please do not to wear a Speedo to the beach. There are just some world leaders I'd rather not see following that trend.
Posted by Tess at 2:28 PM

haha - this is the funniest post =- thanks for the laugh!

I believe that he didn't want to stain his Church of England brogues that's why he chose the flip-flops!
hihihihihi!

I really liked your blog and I'm following you!
I'd ove it if you'd follow me back!
Have a lovely day!!!

You're such a damn badass! Seriously your blog is like the most fresh thing I've ever read. Finally some personality in the blogspot mud.
I love you!

great post..
my opinon - i honestly don't think that there is anything wrong with obama showing his toes..
Big deal..like if anyone has never seen toes!!

thank you! now im following you too *
loved this post of yours, laughed a lot aha

Hahaha! This is the best thing ever! I love the fact that you pasted in pictures of UGGs etc over the original images! You rock! x x

hahhahah this is so funny :D btw the poem on my blog is the lyrics to the song falling by florence and the machine - you should definitely listen to it, I just found the lyrics so powerful...


Ok is the photo of George W doctored or he really wore that?

Check out my Give Away @
http://hotfreezingfashion.blogspot.com/
Sharing Lots of Love n Fun!
♥♥

@ Bella, unfortunately that Bush picture was not doctored. He was really wearing crocs and apparently there is such thing as presidential socks.

Oh gosh! I can't stop to laugh!
"who can take this world leader seriously" ...
Hilarious!
I'm loving you blog :)

Obama just got a whole lot cooler! :D
thanks for the commenting and following my blog!
and of course i'm gonna follow yours,

haha omg you are my favorite, the world needs more people with your sense of humor. My bf and I are currently cracking up at this! Stay awesome!

this has to be the funniest post i''ve seen in a while!! :) thanks.followin, follow me back yA?

Simply amazing. Baracks feet are ...oddly cute. I shouldn't be able to say that. I feel like I'm uncovering some top secret government information.

hahaha this is so good! he does look way too relaxed and casual doesnt he.

AND yes you have to watch toy story 3! spanish buzz is just fricken hilarious! i love it!

hope you are having a good day :) x

such a funny post! :D I can't imagine Sarkozy in UGGS :D
but i've got no problem with Obama wearing flip flops...

That was literally the funniest thing ever! LOL.

Oh my goodness! Hilarious! How does he dare?!
-savy

Hahaha you need to stop it! Hilarious! You should've posted the pic of Terri Richardson with Obama! It's on his website if u wanna take a look... Apparently their hipster friends now haha!

Haha loved this. I hate flip-flops and yet I think it's great that Obama wore'em. That said I don't wanna see other world leaders' feet, either!

(Amusement for my revision break a thank you!)
OBAMA: visionary leader!

you saved all your bestbestbest writing for while I was gone. every single post is sheer epicness <3 and those presidential socks? I WANT A PAIR!

hilarious! but i have to say, we Totally have the hottest world leader right now- USA! USA! USA!
<3 mode.
http://modestylist.blogspot.com

This post is awesome!! Aaaha I died with the Uggs. So creative, I love it!

so funny! I love the satirical essence of this blog x

Flip Flops are at least better than Crocs! Those things creep me out...

Hah! This made laugh- especially the idea of President Sarkozy tucking his suit pants into a pair of uggs :)
xox,
Cee

Thanks for your commet and thanks for follow me!

You are my blogging idol! I love this post. The fist pumping is probably the funniest thing I have ever seen.

Lol I literally couldn't stop laughing through this post. Brillant!

omg, your blog is hilarious! I am seriously entertained!

ninin of the two miss fits

Hahaha this is hilarious! Just found your blog and I'll be sure to check back!

Haha, your posts are always so funny! :)

Your blog = brilliant! So glad to have found you (well I guess technically you found me, but we're together now!). :)

I've followed your blog!
Check out mine when you get a chance :)
http://www.pinkbeautybliss.com

Thanks so much for stopping by. Another post that had me cracking up, especially the photo of Bush in Crocs. UGH!

This has had me laughing for 5 mins non stop now ! LOOOOL
Love the blog, im following :) xx

Haha, these photos are funny! thnx for following me, I am following you back :)

haha... what a funny post! thanks for finding me, now i'm your newest follower! xo

LOL! cuz flaunting your feet is scandaloussss! hahahahaha man sooo presidents don't go to the beach then? or swim?? hmmm that's kind of a sucky life but gets paid well I suppose :D

hehehe...love all the photoshopping ...poor obama

BWAHAHA! I love the picture of Sarcozy with his adorable Uggs. Dying of laughter.

For every Lady Goodman. said...

Haha so funny! Love it :D
What about following each other?
xoxo

Hahaha so funny! it wil be really cool to se these men in Ugg ;)

awesome post.
I actually laughed out loud at this!

wow this was funny!!! great post...I like the picture you made with Obamas head on top of the man's body with a speedo

it 's sarKozy and not "sarcozy".... sorry but i know how to write obama and i'm fucking french... by the way i hate sarkozy, terrible president, even if france is fucked up since a long time but it was funny to see him a pair of uggs!

fantastic post i love it,thanx for following me hun,am now following u back.u hav a wonderful blog and aww thanx for lovely comments..xoxo

Confessions Of A City Girl said...

LOL you are SOOOOOOOOOOOO funny!!!
The French PM and the uggs *DEAD*